Vera and Matt sleep together but when Vera finds out the shocking truth – Matt and Meg were having an affair, she fell pregnant and had an abortion – Matt tells her to get out of his life. Determined to find out who killed Meg, Will makes a deal with Jacs, however he later discovers Meg’s bracelet in Jacs’ cell. After threatening to kill her, Will has Jacs charged with Meg’s murder. Liz and Franky talk about what really happened the day of Meg’s murder: Franky went to find Jacs, and grabbed a knife. When Meg grabbed her arm, Franky thought it was Jacs and stabbed her. Liz took her bracelet and put it in Jacs’ cell. Bea discovers the truth behind Debbie’s murder and confronts Jacs. After Jacs tries to condone it, Bea takes a pen and shoves it into Jacs’ neck and pulls it out, killing her almost instantaneously. She then presses the duress button after Liz had told her to never touch it. 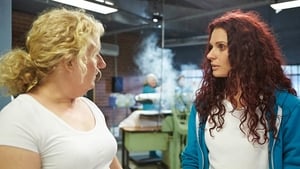