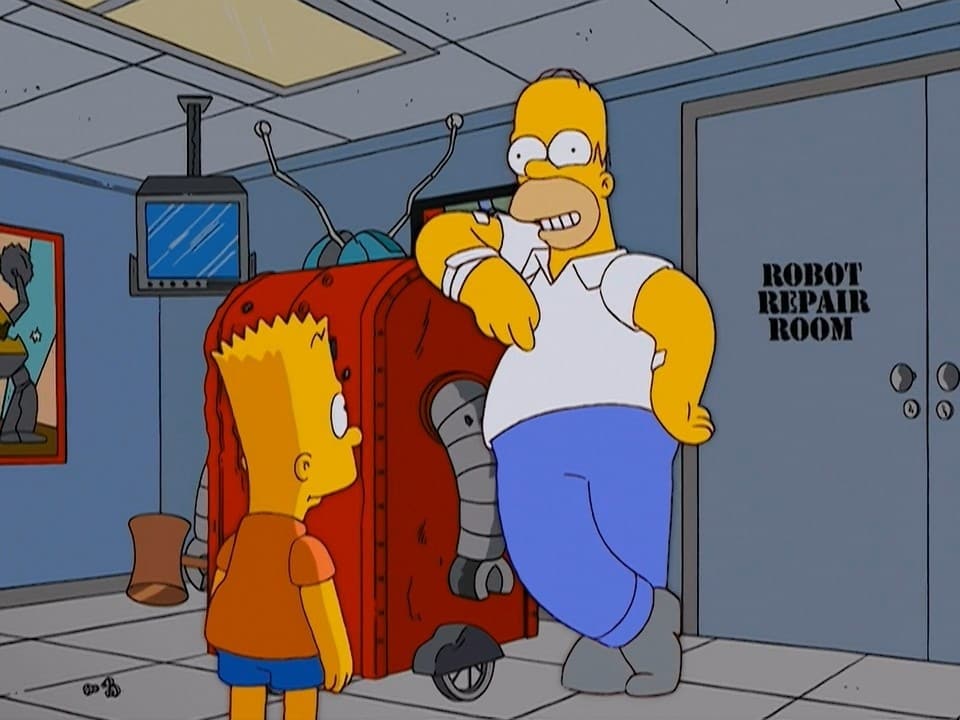 Milhouse comes over with a Psycho Cycle bike conversion kit, which they use on Bart’s bike to make it look cooler. While riding the modified bike, they are hassled by older boys with “big boy” bikes. It makes Bart wish for a ten-speed bike. To get a new bike Bart sacrifices his old bike right in front of Dr. Hibbert’s Mercedes. As Dr. Hibbert leaves his Mercedes then runs over Snowball II and Lisa is devastated. Bart and Homer get Bart a new bike, but it needs to be assembled and Homer tries to do his best. The bike falls apart when Bart tries to show it off to the older boys. Later Bart and Homer are watching “Robot Rumble” and the father and son teams inspire Homer to try building a robot for them to enter in competition but Bart leads Homer to believe that Bart thinks he is an oaf. Marge and Lisa look for a new cat and Lisa finds a new one that she calls Snowball III. Homer tries to build a robot, but his result is a failure. Homer looks to his father for inspiration and becomes a robot instead of building one. Bart wakes to find Homer’s robot in his room, which is actually Homer inside of large metal shell powered by a tricycle. Lisa finds that Snowball III has drowned in the fish tank. Bart competes on “Robot Rumble,” with the robot he’s called “Chief Knock-A-Homer,” but Homer is nowhere to be found. Homer, hidden inside the robot, manages to win his first match, but only after he receives numerous cuts and bruises. Lisa gets (and quickly loses) a new cat named Coltrane. Chief Knock-A-Homer quickly works his way into the finals, but Bart is sorry that his father hasn’t been able to see any of the Chief’s victories. The Chief’s final match is scheduled to be against Professor Frink and his son’s deadly looking robot. Lisa, depressed about her propensity to kill cats, is surprised when a crazy lady leaves her with a new cat. Lisa sees that new cat looks kill proof, and decides to call it Snowball II and forgot the whole dead cat thing ever happened. After the first round of the finals Bart discovers the secret inside of Chief Knock-A-Homer and thinks his dad is even cooler for doing that. The match is stopped in the second round when Homer’s presence in the robot is revealed to everyone. The law of robotics saves Homer’s life and the Frink robot goes out its way to make Homer comfortable. Nature’s greatest killing machine is declared the winner.