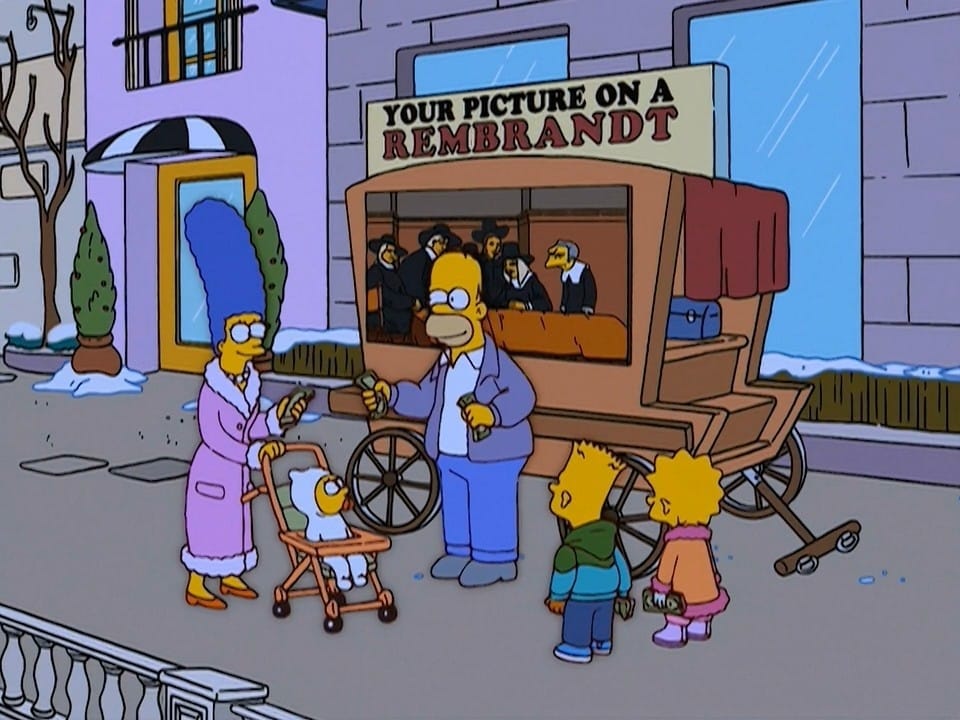 It’s Christmastime and at the power plant Mr. Burns passes out Christmas bonuses, a $5 dollar voucher to the cafeteria. For reasons unknown, Mr. Burns gives Homer a “confectioner’s card” for Bart featuring a “current baseballer.” The “current baseballer” is Joe DiMaggio and it is his rookie card that Homer brings to the Comic Book Guy, where he gets everything he has in the register for the card. With this financial windfall, the Simpson family goes Christmas shopping at the Springfield Heights Promenade, where the rich people shop. Homer spends the remaining portion of his share of the money for a gift for himself (a personalized talking astrolabe) and has no money left to buy the family a nice Christmas tree. Marge and the kids find out what he’s spent the money on and are disappointed in him. Spending the night on the couch, Homer watches “Mr. McGrew’s Christmas Carol” and the story works its magic on Homer, and Homer wakes with resolve to be good and unselfish. Homer starts helping the less fortunate and his good deeds begin to make Ned Flanders’ jealous. To combat against Homer’s good reputation, Ned decides to give everyone in Springfield a Christmas present. Homer decides to outdo Flanders, but on advice from Lisa and her Buddhist view of the world, Homer decides to take everyone’s presents. Homer and SLH (a la the Grinch) sneak into everyone’s home and take all of their presents. The angry mob finds Homer in downtown Springfield. Ned tries to come to Homer’s rescue, but a “star” in the sky saves them both and they return the presents. After Moe’s failed annual suicide attempt the whole town joins in a rendition of “Hark the Herald Angels Sing.”