Special Edna (a.k.a. Love And Marking)

Edna looks forward to the apple picking trip she is going to take Seymour, only he has to cancel because he needs to take care of his mother. Meanwhile, Bart looks for ways to keep from working on his research paper for WWI, including photocopying his butt and joyriding in a Blackhawk helicopter. The day before it’s due, he uses Grampa as a resource. Bart receives F for his effort he works on a revised version of the paper after school. When Bart sees how sad Principal Skinner has made Ms. Krabappel when he cancels a date with her in favor of his mother, Bart goes out with her for the evening. At Lisa’s suggestion, Bart decides to do more for his teacher, he nominates for the “Teacher of the Year” award. Knowing who she has to put with, the award committee selects Ms. Krabappel as their nominee. The award finals are held in Orlando, Florida at “Efcot Center.” As the nominator, Bart (and his family) gets to go to award ceremony as well. Who isn’t going, Seymour Skinner of course, that is until he changes mind. Of course, he has to bring mother along. At the award ceremony, Seymour is worried that he will lose Edna forever. He gets Bart to sabotage her chances at winning, but when it comes down to it he can’t let Bart go through with it. Edna doesn’t win the award, but she does get a marriage proposal from Seymour, with an engagement ring from Little Richard. 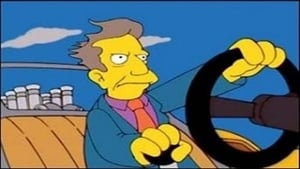