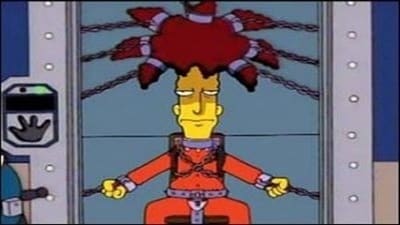 The family receives an invitation to go to a health spa. While there Homer is alone in the steam room, when some unknown person locks him inside and turns the heat up to the “MURDER” setting. Homer and Marge go to see Chief Wiggum for help in finding Homer’s attempted murderer. Chief Wiggum decides to call in an expert on the twisted mind of a murderer. He takes the Simpson family to Campbell’s Chunky Soup Maximum Security Prison to consult with Sideshow Bob. Chief Wiggum strikes a deal Sideshow Bob that will allow him to stay with the Simpson family, which makes Bart nervous. A device is hooked to Sideshow Bob that will allow the family to shock him if he gets out of control. Sideshow Bob follows Homer through a “normal” day. Sideshow Bob sets up a Homer dummy as a trap for Homer’s potential killer. Everyone, including Homer beats the dummy up. At Moe’s someone takes a shot at Homer. Sideshow Bob recommends that Homer stay out of sight, which isn’t going to happen when Homer is elected King of Mardi Gras. At the parade Homer’s float becomes a runaway when its brake line is cut. Sideshow Bob launches himself out of cannon and saves Homer from certain death. Then Homer and Sideshow Bob go after and corner the potential killer, Frank Grimes Jr. Later that evening in Bart’s bedroom, Sideshow Bob appears and he tries to kill Bart quickly, but finds he can’t do it, as he’s “grown accustomed to Bart’s face.”