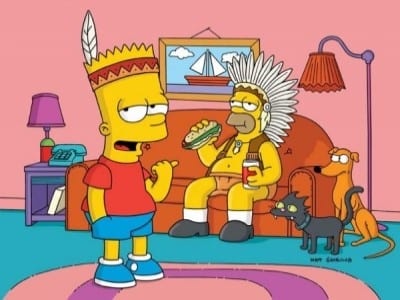 The Bart of War

The family goes to the Springfield Botanical Gardens, where they and the other residents are there to see the blossoming of the Sumatran Century Flower. When his bar is empty, Moe finds out that is where all his customers have gone and he goes to join them. With a capacity crowd plus one on hand, Chief Wiggum has to send someone away and he selects Moe. As a result, Moe is one of the only ones to not be driven out of town by the obnoxious and somewhat lethal (to other plant life) smell of the Sumatran Century Flower when it finally does bloom. The mass exodus from Springfield results in a huge traffic jam on the Springfield Bridge. When traffic begins to move, Homer hits the accelerator, only to have to immediately slam on the brakes, because traffic didn’t move that far. The quick stop to family car and the faulty seat restraint that was holding Maggie in the backseat causes her to be launch through the sunroof and over the side of the bridge. She lands in the arms of Moe, who was perched on the side of the bridge ready to commit suicide. Moe becomes a hero. Moe stops by to see Maggie and winds up watching her when Marge needs to care of Grampa, who’s out on the street acting crazier than normal. Moe becomes Maggie’s fulltime babysitter. Moe entertains Maggie by telling her a story; of course it’s “The Godfather” saga. Late in the evening after Maggie’s birthday party, where Homer began to learn that Maggie prefers Moe over him, Marge and Homer hear Maggie crying. They go to her room only to find Moe already there calming her down. They forbid him to ever see her again. The next day, Moe is lonely and missing Maggie. That night, outside her window, Maggie overhears Fat Tony and his boys plan to take out the Castellaneta family. She crawls out her window and begins pursuing them. Marge discovers Maggie is gone and they immediately suspect Moe. When Moe doesn’t have her and he finds out she is missing, he offers to help. Clues outside Maggie’s window reveal that the mob was gathered outside of her window and Moe suggests that they might find her in little Italy. At a restaurant in Little Italy Maggie finds she is in the middle of an “Italian-American Mexican standoff.” Moe volunteers to go in and rescue her. He draws the mobster’s attention to Maggie which causes them to all go soft. Moe returns Maggie to Homer and Marge and prepares to leave; only Maggie doesn’t want him to go. Homer and Marge agree that Moe can have the occasional play date with Maggie, provided he brings along his ham to accompany Homer.