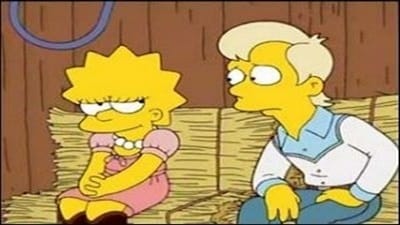 It’s Christmastime and the family is out caroling. When they carol outside of a lawyer’s house, he informs them they can’t sing the song they’re singing without paying a royalty. This inspires Homer to decide to write his own Christmas carol, but when Flanders tries to help and begins annoying him, Homer is instead inspired to write an anti-Flanders song. Homer plays his new song at Moe’s where a passing David Byrne overhears it and offers to produce and record it. The song “Everybody Hates Ned Flanders” becomes a national hit and is even covered by William Shatner. To get away from the over-exposure of the hit song, the family decides to take a vacation to a dude ranch. At the Lazy I ranch, Comic Book Guy looks for an Internet connection and Lisa is annoyed to find out that the ranch was built on cruelty to animals and oppression of indigenous people. Lisa wants to go home, until sometime later when she meets Luke Stetson, a junior wrangler who shares her views. Homer and Bart meet some indigenous people who tell them that they’ve lost their land to a natural beaver dam. Homer gets them to agree to build a fair casino, if he helps them get back their land. Lisa overhears that Luke already has a girlfriend named Clara and her heart is broken. Lisa encounters Clara and gives her false directions to the dance. Homer and Bart manage to outsmart the beavers and indigenous people are able to reclaim their land. At the dance, Lisa finds out that Clara, her competition is actually Luke’s sister. Lisa gets Bart to help her find Clara, who they rescue with the help of some beavers. The family is set to return to Springfield, when they hear a new David Byrne produced song on the radio “The Moe Szyslak Connection” and decide they can afford another week at the ranch.