When Flanders wins a half-time money shot during a WNBA game, Homer asks him what the secret to his good fortune is. Ned reveals his secret as hard work, honest living and flossing his teeth, tail and toes. Also a little prayer now and again doesn’t hurt either. Homer focuses on the notion of the little prayer and when he needs to find the remote for his TV, his own little prayer works. He begins to pray for a number of things. His prayer for a new home pays off when he trips into a hole outside of the church. His lawsuit against the church wins him the deed to the church, since the church can’t afford to pay him $1 million. Homer turns the church into a party palace. Without a place to preach, Reverend Lovejoy and his wife leave Springfield, when preaching at the bowling alley and staying at Ned’s house just doesn’t work for the Reverend. The partying at the church gets out of hand; Marge asks Homer if he is afraid of incurring God’s wrath. Homer isn’t so sure, but then the rainfall begins and Homer is struck by lightning. Soon Springfield has started flooding. When an unruly mob starts to come after Homer, Reverend Lovejoy arrives on the scene asking for forgiveness on behalf of the town. 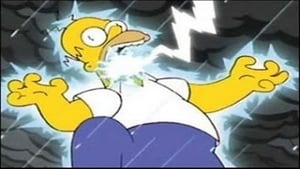