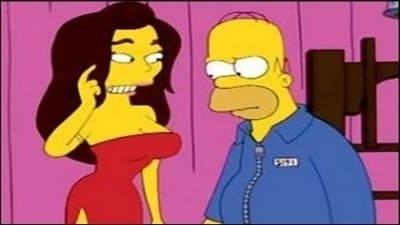 Homer’s ordered Marge an anniversary gift, a pond for the backyard. The new pond attracts a screaming caterpillar. The “screamapillar” as the family finds out is an endangered species and by law they are responsible for its well being. When Homer believes he has killed the insect he tries to hide that fact. The “screamapillar” is okay, but Homer is found guilty of “attempted insecticide” and “aggravated buggery” and is sentenced to 200 hours of community service. Homer begins delivering “Meals on Wheels” and runs scared into the closet when one of his elderly clients appears to be threatening him with an axe. It turns out she is just a kindly old woman, who asks Homer to join him for some company. He starts lending her a hand, and she seems to be taking advantage of him. Marge goes to see her and then finds herself helping the old woman as much as Homer has been. When the old woman turns up dead; Homer and Marge are considered top suspects, when they are named beneficiaries of the woman’s will. They suspect the “man with braces,” who they saw leaving the scene. Everyone suspects them. When the woman’s diamond necklace is found in their home, they are arrested. The children are sent to a yokel foster home and Marge and Homer are found guilty and sentenced to the electric chair. When Homer realizes that Marge is going to miss the children, he confesses to the crime, which allows for her release. On the electric chair Homer is about to be electrocuted when it is revealed he is a participant on a new reality game show “Frame Up”. The man with the braces is the host, and Homer’s murder victim is actually still alive. The old woman is actually Carmen Electra in disguise. Homer is freed, but disgusted that people’s lives are toyed with for TV ratings; this he says while looking Carmen Electra directly in the breasts.