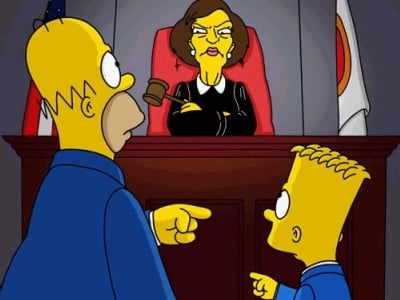 Abandoned by a prize seeking Homer, Milhouse and Bart go for an unintentional joyride in Chief Wiggum’s squad car. In juvenile court, Milhouse gets his case dismissed; however, when Bart goes up before Judge Snyder he is just about to get out of it, when the judge’s vacation starts. The replacement judge isn’t a pushover and citing Homer’s negligence she orders that Bart and Homer be tethered together. The pair attends school, work and Moe’s together and begin bonding. Frustrated by the whole situation Marge cuts the tether and is caught. Judge Harm decides that both Bart’s parents are unfit, so she has Homer and Marge put into stocks and put on public display. Homer and Marge break free and retaliate, only to get caught. When brought before Judge Harm they are about to have the book thrown at them, when Judge Snyder returns from vacation and declares that boys will be boys and dismisses the case.