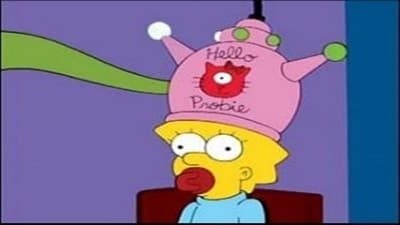 Our story begins a la “Forrest Gump”, with Homer sitting on a park bench waiting for the rest of the family to arrive. While Chief Wiggum initially tells him isn’t interested in hearing Homer’s life story initially, he becomes intrigued as Homer goes right into it, in the form of flashbacks (clips). Homer is picked up and brought blindfolded to the Springfield Friar’s Club where emcee Krusty the Klown and other friends and family roast Homer with their memories (more clips from past episodes). Bart and Lisa start followed by Mr. Burns, Grampa Simpson & Agnes Skinner, Reverend Lovejoy & Ned Flanders (a la “The Smothers Brothers”). The proceedings are interrupted by Kodos and Kang, whom rest the entire fate of humanity upon one human being, Homer Simpson; they cite him as “the fat selfish epitome of modern man”. They probe him revealing more clips, which helps prove to them that humans are unfit to continue existing. Lisa talks them into probing the innocent mind of a child. The probing of Maggie’s mind reveals to Kodos and Kang the most important thing of all for them; Earth is where there favorite celebrities live. Kodos and Kang attend the “People Choice Awards” and the episode ends with a wacky little ditty celebrating more clips, but telling the viewers “not to fear, they have stories for years.”