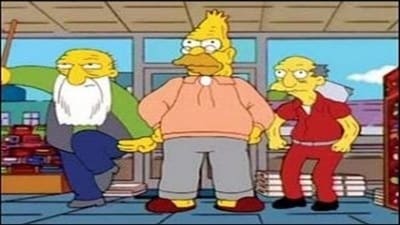 The Old Man and the Key

Homer is anxiously awaiting the start of the new XFL season when the Springfield Retirement Castle calls to report the death of Abraham Simpson, but the report is a mistake. A new woman moves in down the hall and Grandpa decides that he wants to be able to drive a car again, one so that he can feel alive again and two so that he can impress the new woman, Zelda. With his new license in hand, Grandpa borrows Homer’s car for a series of dates with Zelda. In a role reversal, Homer has to lay down the law when Abe stays out with the car all night. Abe runs into trouble at the Kwik-E-Mart with a rival gang of retirees that results in him competing in a death race. Abe wins the race, but Homer’s car is ruined. Homer revokes Abe driving privileges. Zelda has a reservation in Branson and she goes with Abe’s rival. Abe steals Marge’s car and goes with Bart to Branson to get her back. When they get there Abe actually just gets back at her and calls her the “hootchie” everybody said she was.