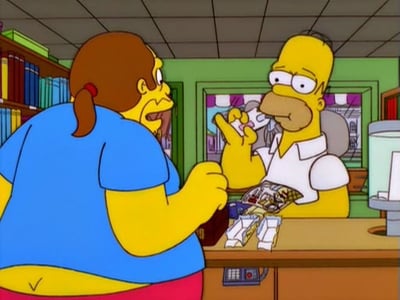 Bart gets an A in astronomy, so Homer takes the family out for a celebration dinner. Homer’s credit card is declined. He and Marge realize that they are broke, so Homer asks Mr. Burns for a raise. With Smithers away in New Mexico mounting his play about Malibu Stacy; Mr. Burns gives Homer a promotion. Homer has to make Mr. Burns laugh. Homer becomes a clown for him with Homer’s life becoming an episode of MTV’s “Jackass.” As the title indicates, he has no dignity. After a panda rapes him, he begins to hate the job. Lisa discovers his secret and tries to get him to retrieve his dignity. Mr. Burns eventually fires him, so he becomes a department store Santa (again?). He is in a parade as Santa when Mr. Burns offers him $1,000,000 to pull one more prank. When Homer refuses, Mr. Burns does it himself, pouring fish guts onto the children.