Hair by Mr. Bean of London

When Mr. Bean has to wait a few minutes for the hairdresser who’s called away by the telephone, he starts playing barber, so three consecutive costumers have their hair done by him, but his inverse Midastouch strikes again: woe their hair and the real hairdresser they complain to! Next he goes to a pet show, starting of by cheating at a dexterity game by unplugging the fault-detection and next deciding to play ‘hit the headmaster’ not just with the provided wet sponges, but wit anything not too heavy for him to lift; then he enters his teddy-bear for the obedience test (meant for kids’ dogs). In the train station he stops at nothing to get on without a ticket, and succeeds as a crawling sack of post – but on which train is he carried? 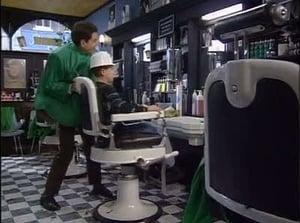