When a babysitter cancels on the McGuires, Lizzie suggests that she’s old enough to do the job for her brother Matt, but mom and dad say no. After much persuasion from Lizzie they relent, and Miranda and Gordo also come over to help. After Mr. and Mrs. McGuire leave, Matt generally causes havoc, spilling grape juice on the rug, acting bratty and taking advantage of Lizzie, who badly wants to impress her parents with her responsibility. Miranda and Gordo aren’t much help as they won’t follow Lizzie’s orders either. At the restaurant Sam McGuire wants to sneak home and check on his daughter and son; Jo doesn’t like the idea, but says just don’t let them see you. Meanwhile at the house, Matt has knocked out the power. Mr. McGuire tries to peer in the window and goes tumbling over. The kids think he’s a burglar and call the police. Mr. McGuire tries to get in the locked house and the kids wage a battle against him reminiscent of the movie Home Alone. The police come to arrest Sam. After al 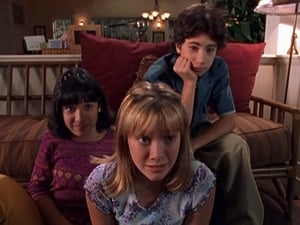