Lizzie tries out for cheerleader but doesn’t do very well. Later that night she and Miranda chat online. Lizzie jokes that Kate made the squad because she stuffs her bra. Miranda accidentally sends out the message to everyone on the class roster. The next day at school Kate is furious about the taunting she’s receiving and confronts Lizzie and Miranda, demanding to know who is responsible. Lizzie stutters and stammers for a few moments, then Miranda says that she did it. Kate promises to make her life miserable, and a war of dirty tricks breaks out between the two. Miranda tells Lizzie that she took the blame because Lizzie can’t handle conflict. Lizzie feels guilty as the war between Miranda and Kate escalates. Finally Lizzie works up the nerve to take responsibilty for the message and she stands up to Kate. Also, Matt brings home a lizard for a school project and names it Lizzie, much to his sister’s annoyance. While Mr. and Mrs. McGuire are supposed to be watching the lizard, it die 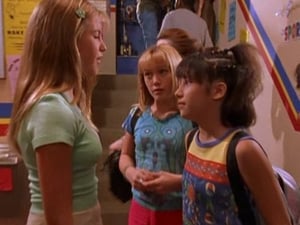