Gordo and the Dwarves

Gammy McGuire sends Lizzie one of her frequent “”birthday”” gifts–a role-playing game called Dwarflord: The Conquest. Mom insists that Lizzie play it at least once, so she recruits reluctant Miranda and Gordo for a game. The girls can’t understand the incredibly complex rules but Gordo likes it. In fact, Gordo joins a “”Dwarf Tribe”” at school (led by Tudgeman, of course) and begins to spend all his time playing and thinking about the game. Gordo gets so obsessed that he even quits studying and, unbelievably, gets an “”F”” on a test! Lizzie and Miranda try to talk some sense back into Gordo but he refuses to see he is addicted to the game. Matt agrees to help the girls capture Gordo and help to deprogram him. They stealthily invade a Dwarflord game, abduct Gordo and hold an intervention in which they finally convince him to go back to his old lifestyle. Also, Matt has to observe wildlife for a school project. His dad Sam helps him out by climbing up a tree with him to look at a bird’s nest. 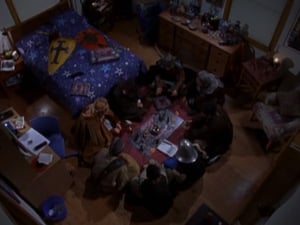