Director Stan Jansen is filming a documentary at the junior high and everyone is trying to get on camera–except Gordo, who wants to be a director himself. But Stan singles out Gordo as his star and tells him his appearance in the film could lead to a career in directing. Gordo is eager to go along, so when the director tells him he wants conflict, Gordo trashes Kate on camera. Lizzie and Miranda think that’s great, but it’s not so great when Tudgeman gets upset after the same treatment. Then when Gordo manipulates Lizzie and Miranda into revealing long-held secrets about each other, the trio’s friendship is on the rocks. The girls can’t stay mad at each other, though, and they convince Gordo that their friendship should be the most important thing to all of them. The kids find a way to get back at Stan Jansen. Meanwhile, Matt’s classmate Melina is a real troublemaker–something he can appreciate. She’s so good at it that she manages to get Matt blamed for every bad thing she does. Des 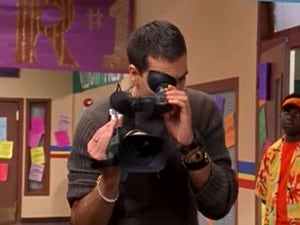