Gordo has his camera and is filming Lizzie and Miranda in the school cafeteria. He forgets the camera when they leave, and when he goes back for it, he finds it was running the whole time. When the friends view the footage, they see Kate telling Claire a big secret–she’s fourteen, a year older than the other seventh graders, because she was held back in kindergarten! This gives Gordo an idea. He sets up several hidden cameras around the school which catch lots of embarrassing moments on tape. Gordo plans to make a movie and enter it in a local competition, hoping to prove with it that even the popular kids have things to be embarrassed about. Miranda is having a bad day, and at lunch she complains to Lizzie about the school and the people in it. Unknown to them, Gordo’s hidden camera filmed them. When Miranda finds out Gordo intends to use her footage in his film, Miranda is outraged. Lizzie is caught right in the middle between her two friends, both of whom expect her support. But wh 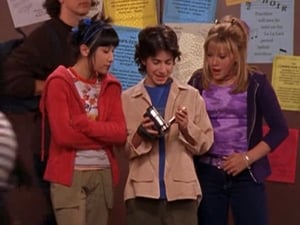