Night of The Day of the Dead

The middle school is putting on a big Fright Night celebration for Halloween. Lizzie wants to appear as Vampira, the dungeon mistress, but Kate is in charge and she keeps the job for herself, making Lizzie clean out the janitor’s closet and then giving her the role of a clown handing out balloons. Miranda brings her parents, who are helping her celebrate a Mexican holiday, the Day of the Dead. They bring by several items including skulls and skeletons which are meant to represent ancestors who are being honored. Kate is all smiles when Miranda’s parents are around (“”Toon Lizzie”” calls Kate “”phonier than cafeteria cheese””), but once they leave she yells at Miranda to get rid of that junk they brought. Miranda warns Kate that by disrespecting the dead, she is risking their wrath. Strange things begin to happen at Fright Night. The skeletons disappear, and so does Matt (dressed as himself turned inside out!), leaving behind only a handful of dirt! Gordo is gone too, but his voice is comin 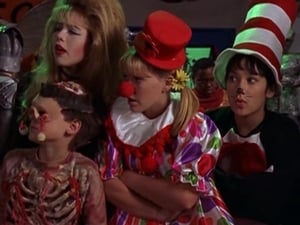