Come Fly With Me

Gordo, always the nonconformist, has a new passion: 1950s & ’60s Las Vegas lounge culture, as epitomized by Frank Sinatra and the “”Rat Pack.”” Lizzie and Miranda don’t care for it, but they buy Gordo a Rat Pack CD. Ethan Craft listens to it on the bus and, surprisingly, likes it, which makes the girls reconsider their opinion. Soon they are dressing in fashions of the time. Gordo thinks it’s cool that they like it, but hopes that his new interest won’t become the latest passing fad at school. But that looks like exactly what is happening as Ethan soon has all the guys wearing hats like Sinatra and listening to the music. Even Kate is admiring the girls for being in first on the new trend and actually asks for their advice on what to do! Gordo starts to sour on the Rat Pack and he comes up with a new interest–radio-controlled 1/64 scale World War II airplanes, only his enthusiasm doesn’t seem genuine. Committee chairman Kate plans the theme for the next dance, “”Lounging Around.”” She put 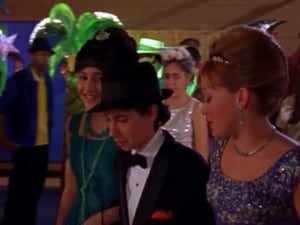